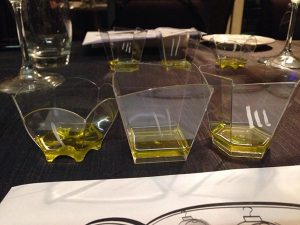 Winey / Vinegary – Defect deriving from bad storage of the olives, which can trigger the fermentation of sugars and hence the presence of acetic acid and other derivatives. To the nose, the smells of wine and vinegar.

Sour – Sharp sensation that involves both taste and feel, denoting an imbalance in the oil which renders it astringent and tart.

Astringency – If only slight and well-balanced in the overall expressive impact, it maintains the quality of being dry and clean on the finish. When it causes the mouth to contract violently, as occurs with an unripe fruit, it is evidence of an incorrect use of green, non-coloring olives.

Cooked – Smell of oil that is tired as though it had been heated; this can be due to high temperatures during the processing phases.

Fiber disc – This is, of course relevant to oils processed with the traditional method. It derives from the use of fiber discs that have not been properly cleansed of the processing residues and recalls the smell of fermentation.

Frozen – This derives from the use of olives that have suffered frost damage resulting in a taste that is insipid, woody and lacking in freshness.

Rough – Attributed to oils without character, that tend to be greasy and with stale aromatic sensations.

Greasy – Deriving from the contamination of the oil with the greasy residues of the processing machinery; this is rare nowadays but when it occurs it is indicative of poor hygiene of the oil mill.

Metallic – Marked olfactory sensation reminiscent of metal. May be due to prolonged contact with certain parts of the processing machines (iron) or due to the poor quality of the containers (jars, tins, barrels).

Sludge – This is caused by sediment that has not been properly separated from the oil and has gone into fermentation. This can be easily avoided by taking more care during decanting and storage phases.

Mould – From olives collected when already on the ground or badly preserved. Reminiscent of moulds, with damp and fungal notes.

Rancid – Perhaps the most well-known and frequent defect. This derives from oxidation caused by prolonged contact with the air either of the olives or of the oil itself. It gradually occurs as healthy oils age (old).

Net (plastic) – This derives from the prolonged contact of the olives with the collecting nets and is reminiscent of plastic, with marked deterioration of the oil’s expressive qualities.

Heated/Burnt – Another fermentation defect of the olives, amassed and stored for too long prior to processing. It can also occur when processing temperatures are too high.

Sansa (Sediment) – Scent that recalls the solid residue (sediment) generated during processing, which has probably not been separated quickly enough and with the required care.

Dry – Frequent in years of drought, it leaves the oil too dry, woody and lacking in vigor.

Earthy – From olives collected after falling to the ground and/or not properly washed.